In 2015, Sentara designed this study to address the potential confounders in the Sentara Leigh 2014 study (patient characteristics, new building, and DNV MIR certiﬁcation. Sentara expanded the deployment of copper- infused patient gowns, linens and hard surfaces from half to all inpatient rooms at Sentara Leigh Hospital, and added to control facilities Sentara princess Anne Hospital (new build, now referred to as Facility 2) and Sentara Virginia Beach hospital (also DNV-MIR certiﬁed, now referred to as Facility 3) to the analysis. The infection rate trends for each of the three facilities were compared between the Baseline Period and the Assessment Period.

This study addressed the potential confounders of the 2014 study. The copper facility experienced reduced rates in the primary endpoints while the two control facilities saw rate increases. As a result of these ﬁndings, Sentara approved a business case expanding the deployment of Cupron’s patient gowns and bed linens, as well as Cupron Enhanced EOS copper-infused bed rail covers and overbed tables, to all inpatient rooms across the Sentara Healthcare system (12 hospitals and 2,522 beds). This study was published in the International Journal of Infection Control in 2018. 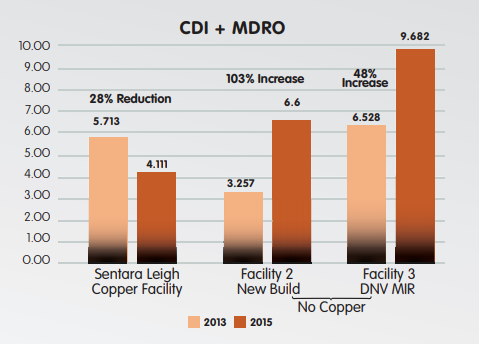 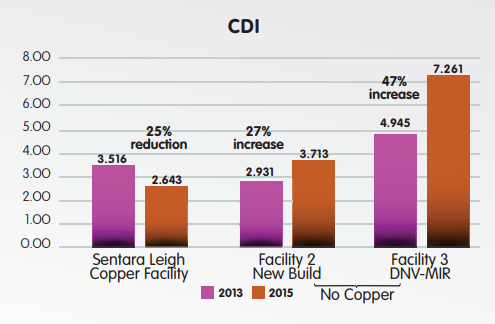