In a recent blog post by Jon Otter ( I recommend you follow him also)  he reviewed antibiotics, anti-infectives and other infection related antimicrobials by their desired functionality and also built a hierarchy of these products. This post was really interesting, and made me think about where we can group a wide range of products in daily use for environmental decolonization and decontamination to provide clarity about where to use different terms, and also where certain products get used in infection prevention from an environmental point of view.

The term “antimicrobial” is the broadest umbrella term that we can find due to its generic nature. Unfortunately the term antimicrobial might suffice for broad discussions, but due to the different range of terms contained within antimicrobial which includes antibiotics, biocides (sanitizers, disinfectants and sterilizers), antiseptics, and anti-infectives we need some clarity as to what we are discussing and the purpose of this blog post is to provide some ideas and thoughts in this area.

We initially have to therefore focus within the antimcirobial space on antiseptics and anti-infectives which are both used to help prevent and or treat infection. Antiseptics are “antimicrobial substances that are applied to living tissue/skin to reduce the possibility of infection, sepsis, or putrefaction.” Anti-infectives are “agents that are capable of acting against infection, either by inhibiting the spread of an infectious agent or by killing the infectious agent outright”. These elements form an essential part of the infection prevention efforts, however the focus of our post is to review the environmental options which are detailed below.

Underneath the umbrella term antimicrobials, the environmentally focused categories are the Biocides. Biocides are again a broad umbrella term for products designed to “destroy, render harmless, prevent the action of, or otherwise exert a controlling effect on any harmful organism by chemical or biological means”. This ranges from disinfectants, preservatives, drinking water and food stuff disinfectants, algaecidal, molluscidal, and anti fouling products to rodenticides, avicides, and insecticides. Typically biocides have a broad range of efficacy hence the classification as a biocide. Specific types of biocides according to the EPA include

1.Disinfectants:Used on, nonliving surfaces and objects to destroy or irreversibly inactivate infectious fungi and bacteria but not necessarily their spores. If they do have efficacy against spores then the disinfectant product becomes a Sporicide. If the disinfectant has broad spectrum activity then it becomes a Germicide: “A germicide is a substance or mixtures of substances that kill a number of microorganisms”.

2. Sanitizers:Used to reduce, but not necessarily eliminate, microorganisms from the inanimate environment to levels considered safe as determined by public health codes or regulations.  Sanitizers are designed to make products sanitary and protect the user from pathogens by reducing the levels of pathogens to levels that are deemed acceptable by a range of authorities.

3. Sterilant:Used to eliminate or destroy:

Sterilization is critical to infection control and is widely used in hospitals on medical and surgical, instruments and equipment. Types of sterilizers include physical and means of sterilization and chemical methods.

If we look at this hierarchy suggested in Jon’s post with the inclusion of the environmental agents we would see a hierarchy that looks like this. 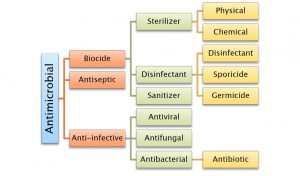 If we take this hierarchy one step further and overlay where and how the commonest products are used in these categories to protect patients in the hospital by infection preventionists, and the care team we can color code the hierarchy. 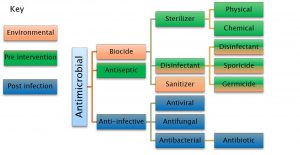 Where protection from harmful microorganisms from the environment is required, a range of products such as biocides should be considered, includin disinfectants and sanitizers.

To protect patients before any intervention or surgery a wide range of antiseptics (chemicals applied to the skin for disinfection and decolonization) are used and sterilizers are used to sterilize associated devices (disinfectants are also used hence the dual color). In the event of an infection a range of anti infectives-anti bacterial (antibiotics), anti fungal and anti viral can be utilized to treat the infections that have been acquired.

As always please feel free to comment/discuss any thoughts around this post below.