The study was conducted over a 25.5-month time period that included a 3.5-month washout period. HAI rates obtained from the copper-containing new hospital wing (14,479 patient-days) and the unmodified hospital wing (19,177 patient-days) were compared with those from the baseline period (46,391 patient-days). The new wing had 78% (P=.023) fewer HAIs due to MDROs or C. difficile, 83% (P=.048) fewer cases of C. difficile infection, and 68% (P=.252) fewer infections due to MDROs relative to the baseline period.
No changes in rates of HAI were observed in the unmodified hospital wing. 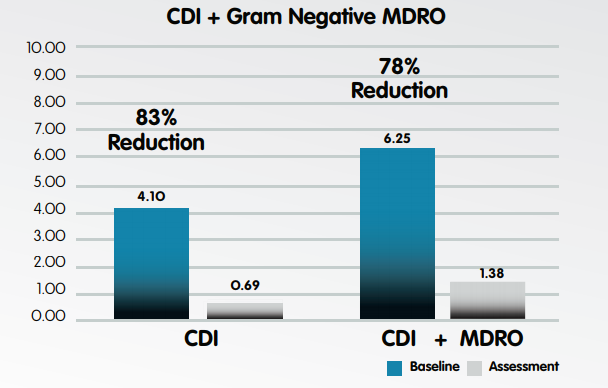 The reductions in the primary endpoints were large and statistically significant, however the study had potential confounders including differences in patient characteristics, new construction, and the potential impact of DNV-MIR certification. In 2015 the entire hospital was converted to copper patient gowns, bed linens and hard surfaces and a second, expanded study was conducted to address the potential confounders in this study. This study was published in the American Journal of Infection Control in 2016.