As discussed in our previous blogs, surfaces with frequent hand contact and in close proximity to the patients are often the most colonized with pathogens. These pathogens can remain viable on these inanimate surfaces for prolonged periods of time, and over a wide range of environmental conditions.

The contribution of this environmental pathogen contamination to outbreaks of C. difficile, MRSA, VRE, A. baumannii, norovirus and other nosocomial pathogens infections has been already established (1-5).  In this post, I would like to briefly review some of the findings showing that these pathogens, which remain viable on hard surfaces, can directly contribute to HAI.

The most compelling data that suggests  environmental contamination 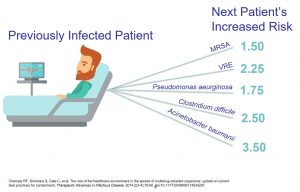 plays a role in contributing to HAIs are the findings that admission to a room previously occupied by environmentally-associated pathogens increases the risk of infection for incoming patients (6, 7).

For example, MRSA, VRE and C. difficile were cultured from 43%, 13% and 17% of surfaces in rooms used by patients not known to be MRSA, VRE or C. difficile positive, respectively (8-10).

Accordingly, environmental decontamination of patient rooms prior of their reuse was found to reduce the risk of the new patients acquiring multidrug-resistant organisms (MDRO) or other nosocomial pathogens. For instance, patients admitted to rooms, previously used by patients known to be infected or colonized with MDRO, that were decontaminated with hydrogen peroxide vapor (HPV), were significantly less likely to acquire any MDRO (64% reduction) than patients admitted to rooms disinfected using standard methods (11).

Similarly, a retrospective cohort intervention study conducted in 10 ICUs at a US hospital found that improved cleaning and disinfection following room occupancy resulted in 50% and 27% reduction in acquisition of both MRSA and VRE, respectively (12).

Interestingly, a recent study found that patients hospitalized in bed/rooms previously occupied by someone given antibiotics are 22% more likely to develop a C. difficile infection, even if they do not themselves receive antibiotics (13).

The infectious dose for most environmentally-associated nosocomial pathogens is quite low. E.g. <1 CFU/cm2 of C. difficile, a single norovirus particle, and less than 15 S. aureus cells, were sufficient to cause infection in different experimental models (14-16). It has been found that the concentration of nosocomial pathogens on surfaces is generally in the range of <1 to 100 CFU/cm2,(17,18) although higher concentrations of surface contamination were reported (19-21).  Thus, touching a contaminated hard surface may be a risk for transmission. This is further supported by the finding that improved cleaning and disinfection, which reduces the bioburden, reduces the overall infection rates (22).

Studies indicate that transfer from surfaces to hands and vice versa readily occur (23-26). Furthermore, several studies have shown that bacterial pathogens were acquired by hospital personnel through contact with environmental surfaces in the absence of direct patient contact ( 27-30).

In conclusion, there is quite clear evidence that supports the notion that contamination of hard surfaces with nosocomial pathogens in the clinical environment plays an important role in the HAI of both the current occupant of the room, and potentially the next occupant in the room.

References cited in this article